In July 2018 the Group raised CHF 505 million through the concurrent issuance of new shares and convertible bonds resulting in net proceeds of CHF 498 million due to issuance costs (CHF 4 million) and stamp duty (CHF 3 million).

On September 30, 2019, the Group had an undrawn credit line from Cilag. Further details can be found in the Half Year 2019 Financial Report.

On June 15, 2017 Cilag Holding AG ("Cilag") provided a loan of CHF 580 million to the Group, which was convertible into ordinary shares of the Group up to an aggregate of 32% of the share capital at the time that the loan was provided. The loan does not carry interest, has a term of 10 years and matures on June 15, 2027.

Further details can be found in the Half Year 2019 Financial Report.

On July 17, 2018 the Group issued CHF 200 million of senior unsecured convertible bonds (“the Bonds”). The Bonds mature on July 17, 2024 and are convertible into 5.9 million registered shares of the Group, sourced from existing conditional share capital, on or after August 27, 2018. The Bonds have a coupon of 0.75% and a conversion price of CHF 33.95, corresponding to a conversion premium of 32.5% above the bookbuilding price of the privately placed newly issued shares.

Further details can be found in the Half Year 2019 Financial Report. 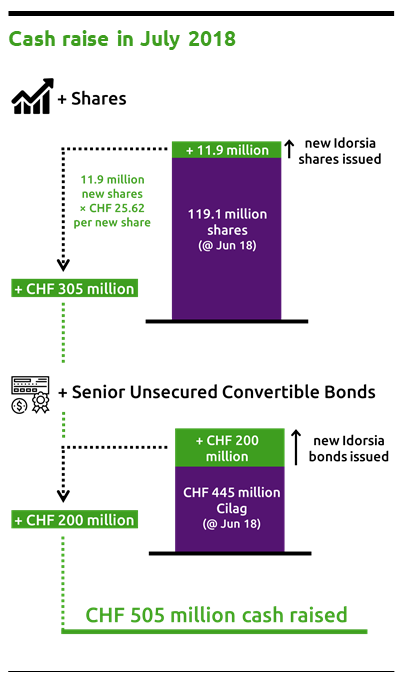 "We are all encouraged to talk, share, communicate and participate."