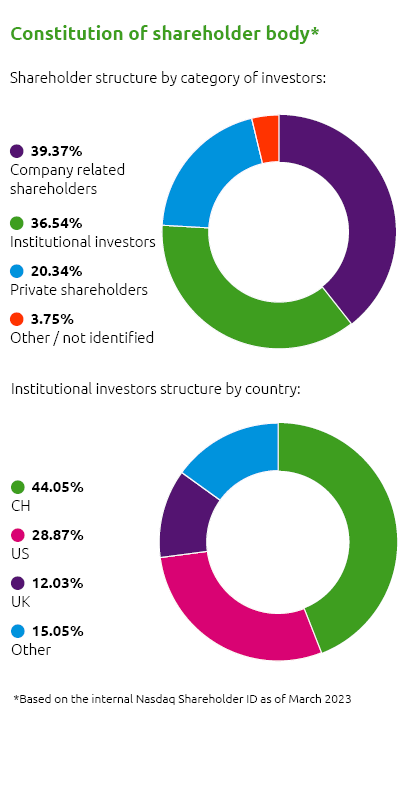 On July 13, 2018 the Group privately placed 11,912,000 new registered shares of CHF 0.05 par value from existing authorized capital at CHF 25.62 per new share receiving gross proceeds of CHF 305 million through an accelerated book-building process. Concurrently to the private placement of new shares, the Group issued CHF 200 million of senior unsecured convertible bonds (“the Bonds”) on July 17, 2018. The Bonds mature on July 17, 2024 and are convertible into 5.9 million registered shares of the Group.

On October 22, 2020, the Group issued 23.8 million new registered shares from existing authorized share capital at CHF 22.50 per new share receiving gross proceeds of CHF 535.5 million through an at-market rights offering. As a result of the capital increase, the share capital of Idorsia registered in the commercial register was increased from CHF 7,132,337.30 to CHF 8,322,337.30 divided into 166,446,746 registered shares with a nominal value of CHF 0.05 each.

We will update this information quarterly.

As of September 30, 2021, the company has been notified of the following shareholdings or voting rights amounting to 3% or more of the company’s issued ordinary share capital:

How To Buy Stock

Idorsia shares are traded on the SIX Swiss Stock Exchange. Investors wishing to become a shareholder in Idorsia should contact their local bank with the following information:

Bank staff will then be able to use this information to execute the transaction.

How To Register Shares

As part of our continued efforts towards good corporate governance we encourage shareholders to exercise their voting rights at the Annual General Meeting (AGM) of Idorsia Ltd.

The registration of shares is not mandatory under Swiss law. Therefore, registered shares are not automatically registered in our Share Register.

Idorsia has mandated areg.ch to administer its Share Register. Investors wishing to register their shares are kindly asked to contact their prime custodian (e.g. your banker or broker) to request a share registration form. After completing the form, your custodian will send it to areg.ch who will then take care of the registration. The custodian will receive a confirmation directly from areg.ch once the registration has taken place.

"I enjoy working for Idorsia because of the culture of communication that provides the basis for creative scientific research."